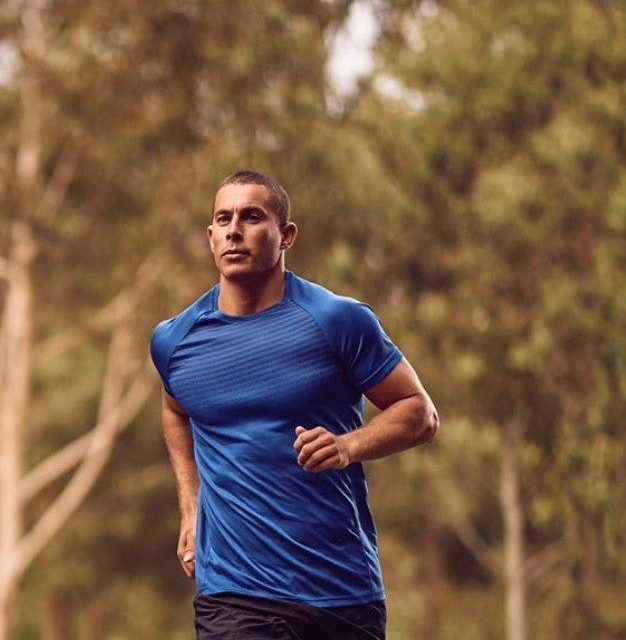 Today’s Friday friend is a bit different – not a runner as such but someone we met at the beginning of our running journey who ,as you will read, has played a very important part in it. Today we introduce you to Craig Baker.

So this week we have a very special Friday Friend – someone who if it wasn’t for them we probably wouldn’t have ever started running. Craig Baker was the personal trainer who in 2009 took me (Jacquie) a non-sporty and unfit 56 year old and (eventually) turned me into a runner. Soon after this he also started to train Cam, who at the time was very reluctant to even step on a treadmill, and look at her now!

During the time we worked with him Craig became a family friend. Craig competed as a decathlete himself, so was definitely not a long distance runner, but has always been encouraging and supportive of our running. He once came along to Richmond parkrun and ran, what for him was, an endurance event.

We trained with Craig for a number of years until he left for a holiday in Australia – from which he did not return. He’s never really been forgiven and definitely not replaced but we’ve kept in touch. This week he is on a rare visit to the UK and stayed with us for a few days when he arrived. One of the first things we did was go down to the gym.

While he was here we asked Craig a few questions about his own sport and his work with runners – including us. Let’s hear what he has to say.

My story in sport started as a childhood gymnast, It taught me a lot of discipline, but by the time I made it to my teens my passion for athletics had taken over. Something about chasing distances, heights and times just lit me up.My career in athletics really took off once I started at Brunel University to study sport sciences, this was back in 2003, just as the university was becoming a national hub for track and field. After graduating I was fortunate enough to represent GB in decathlon.

Around this time I moved to Chiswick and became a personal trainer. Jacquie was in fact one of my first clients, we trained right up until I went to Australia in 2013 (oops). I continue to personal train and coach athletics in Sydney with a focus on running performance and sports conditioning. 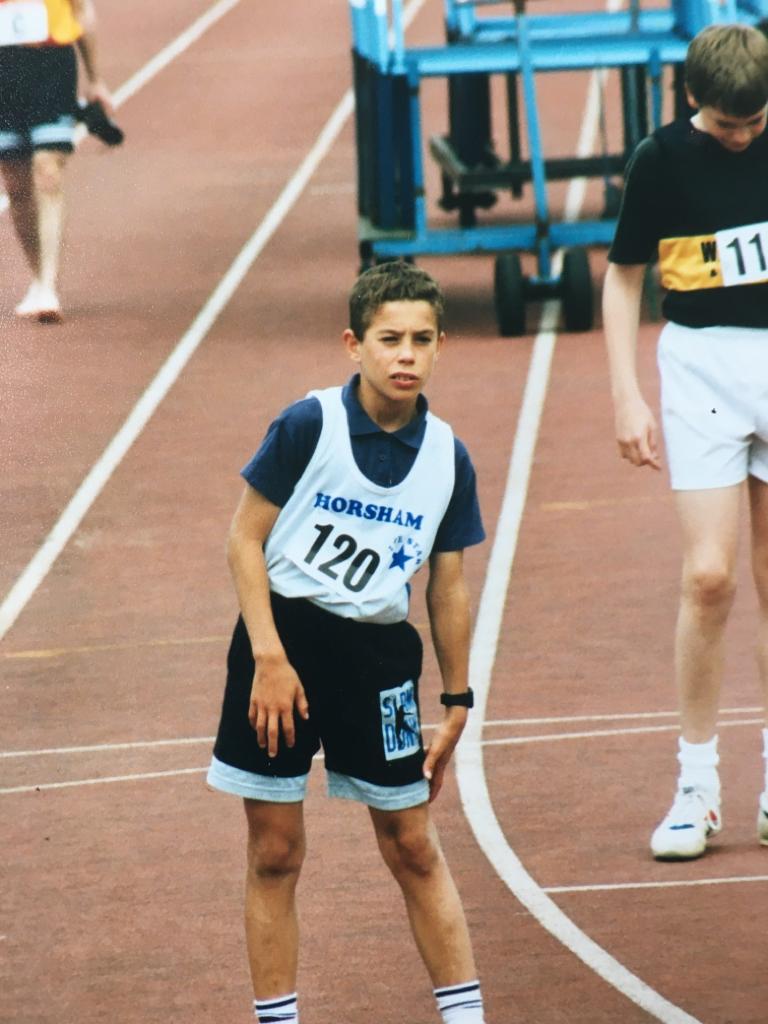 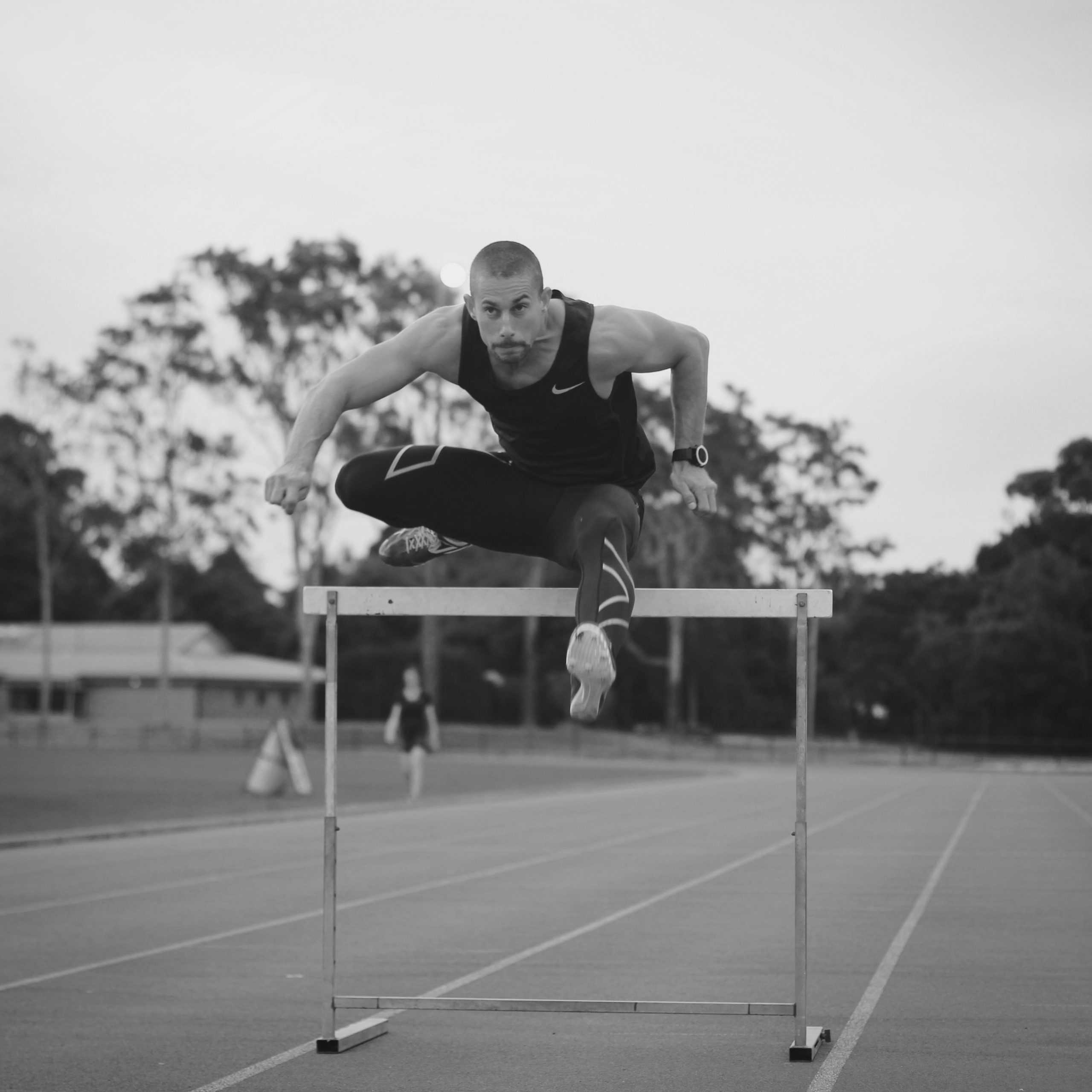 Above left: An athlete in the making

Above right and below left: Craig performing in decathlon disciplines 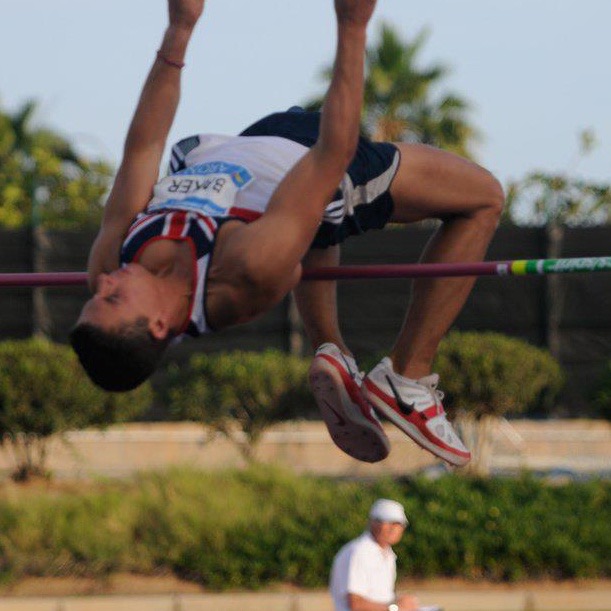 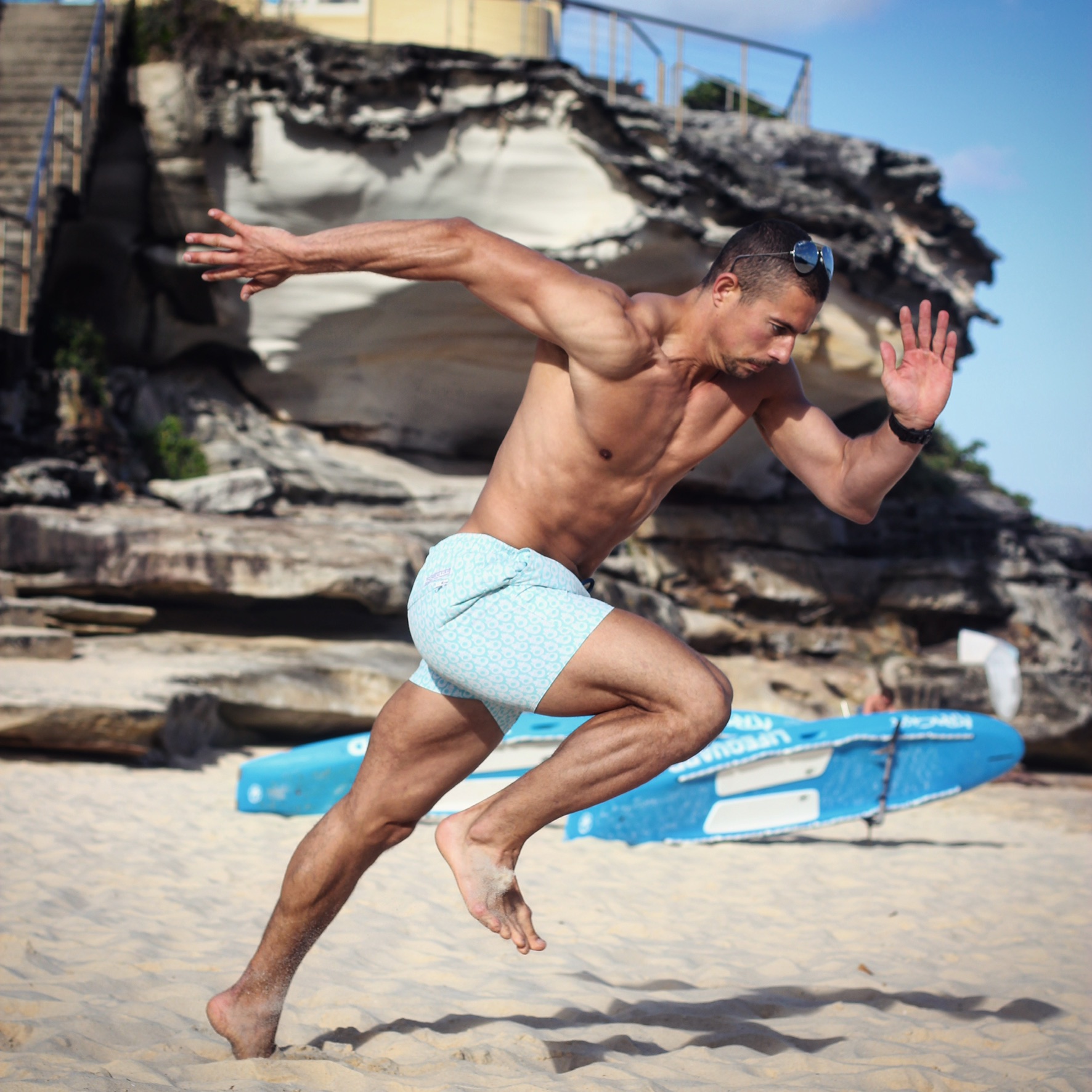 I had no expectations When I first met Jacquie, this very slight, 56 year old lady who, self admittedly, wasn’t particularly sporty. Despite this, she put her faith in me and gave a go to everything I suggested. Such an attitude towards training is golden.

Her core strength became excellent and soon I was comfortable using my trademark  ‘push you to your limits’ methodology on Jacquie.. only to find she didn’t seem to have any limits- particularly on the treadmill; I remember setting her a 60sec sprint each week, starting at about 12kph, increasing the speed a little each time. I was astounded when after not long she was pretty comfortable bouncing along at 17kph, then 18…19kph! It was like something out of that film ‘Unbreakable’, where Bruce Willis keeps adding more and more weight to his bench press until the realisation dawns on him, he’s superhuman.

It was at this point that iIpossibly told Jacquie she is not normal and that she should consider taking up running as a sport. The experience really taught me how talents can lay undiscovered in people that don’t find the opportunity to be pushed

The total opposite to Jacquie! At first I was convinced these two people can’t be related. Cam just despised running, it took all my energy to get her to warm up on the treadmill for 4 minutes, or to get her down the track to sprint 100m. It wasn’t for lack of talent though. Whilst training she became exceptionally strong, could do 13 unassisted chin ups, had quads like a race horse and to this day has the fastest 200m on a erg rower of any female I’ve trained.

Like Jacquie, Cam surprised me with her determination but she didn’t believe running was her game. I have no idea what kind of voodoo took place after I left for Australia but I was amazed to hear that Camilla had not only taken up running but was good at it

Five exercises I recommend to runners

Tough question as every ones needs are different. However with distance running, I think you have to consider the exercises that might prevent the most common injuries while developing stability throughout a range of motion

Single leg glute bridges – strong glutes are so important for correct stride mechanics and injury preventIon. Most people’s are weak, as mine used to be.

Plank variations – leg taps, side plank with leg raise etc. Core stability will improve running economy and help prevent some injuries.
Lunge variations – compass lunges holding a medicine ball above head, or runners lunges with a twist etc. This is mostly about strength, stability and mobility.
Single leg Romanian deadlift– for posterior chain activation (glutes and hamstrings)
Isometric calf raise – for shorter ground contact times and Achilles’ tendon strength.
Advanced: Run specific Plyometrics and drills – for strength, power, reactivity and running economy. As a decathlete this made up a large part of my training.

The link below is a good running specific conditioning series that covers most of the above. It can be done from home!

How to improve speed:

The best way to improve speed is undoubtedly doing sprint work with additional benefits on running economy and lactate threshold across all the distances. But proceed with care and start gradually. Distance runners are notoriously inflexible (which can have its benefits) but the faster you run/sprint the more elasticity you will require (particularly through the hips) and thus the higher your risk of sustaining injury.

Start with longer sprint distances (400m reps perhaps) at 80% and work down to perhaps 150-200m reps at 90% effort. Try to do these at a proper running track.  Important to remember sprint sessions will require longer recovery times and  are more ideally done outside of the aerobic base phase of training. 4-6 sessions in your race prep phase is enough to gain significant benefits.

Dynamic stretching to improve flexibility and stride length will also improve your speed,  as will perfecting running drills, so much is lost to poor form.

How to improve Endurance:

I think people respond differently to various modes of endurance training. What is universal though is consistency with training and effective recovery-stretching/ foam rolling, eating and sleeping well.
My personal top 3 training methods for improving endurance would be:

Lactate training such as interval running at over-race-pace with active rest. One session I remember fondly (not) was 60s run/ 60sec jog for 20min. The target was to run the same distance each alternate minute – 300m on the run then 100m on the jog for example. This can be increased to 2mins on/90s off over 35mins for longer distance runners

Hiit training for local muscular endurance is super too and is a great alternative to break up your running sessions and perhaps prevent overuse injuries. Circuit/hiit training can be brutal and always seemed to transfer well to running for me.

Better running economy will improve your endurance, so I think investing a little bit of time and money on a proper gait analysis or a running coach could make a big difference, as will practising those sprint drills! 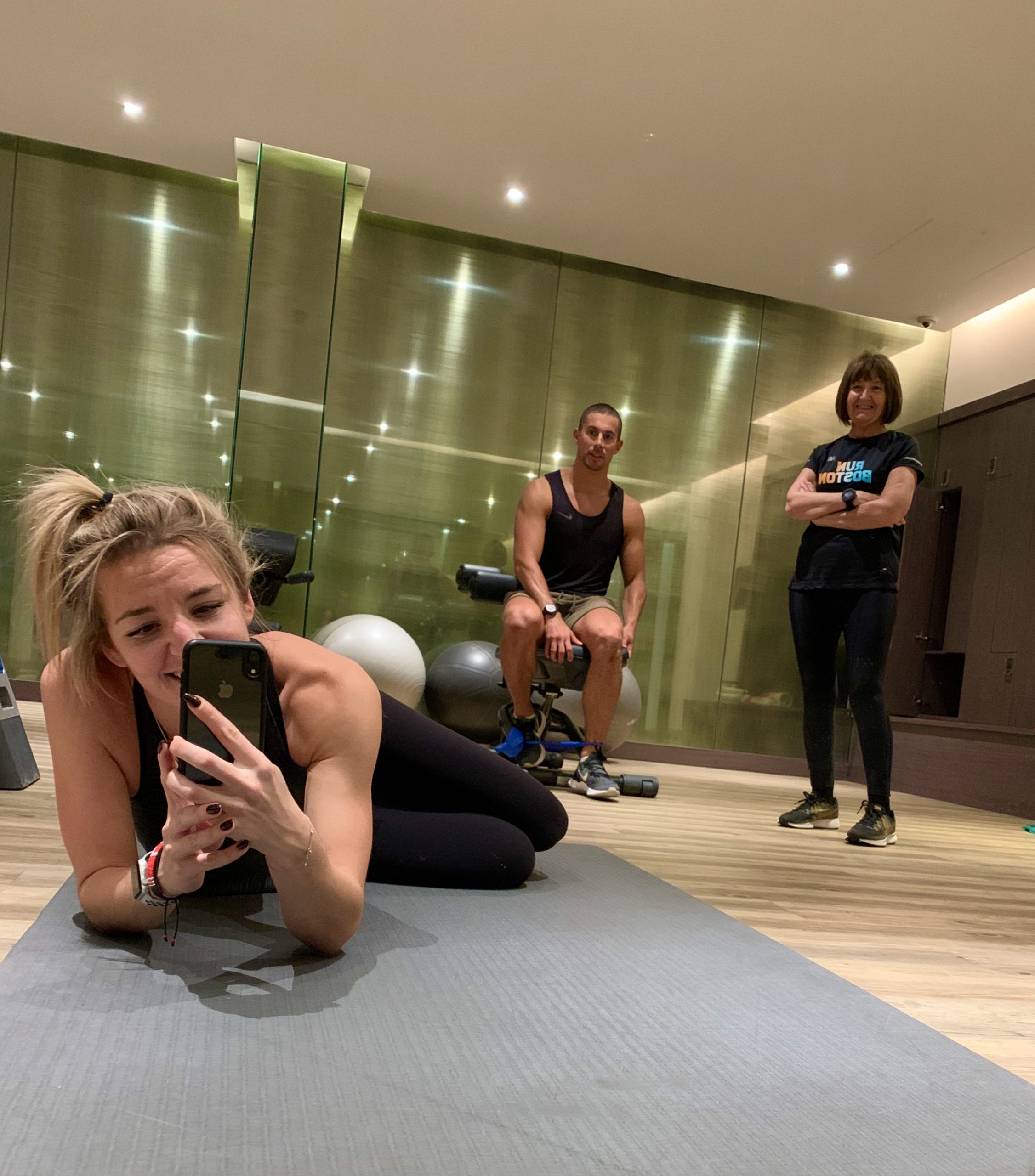 Thank you Craig for this and for all your hard work with us in the past. It certainly prepared us for a very special journey – one that changed our lives very much for the better. We hope to go out and run some races in Australia in the not too distant future but for now it’s back to the gym and track for us! 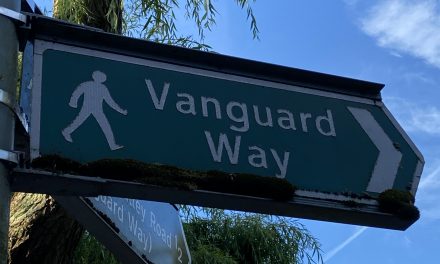 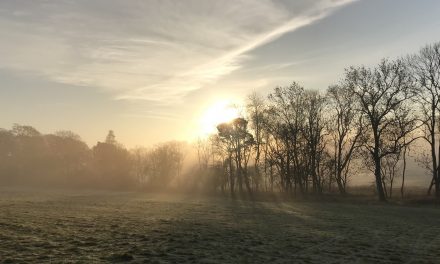 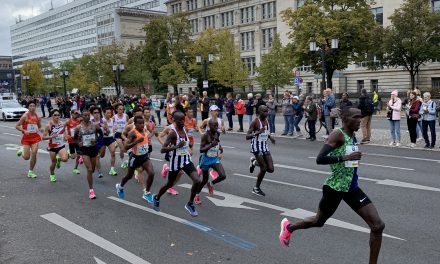