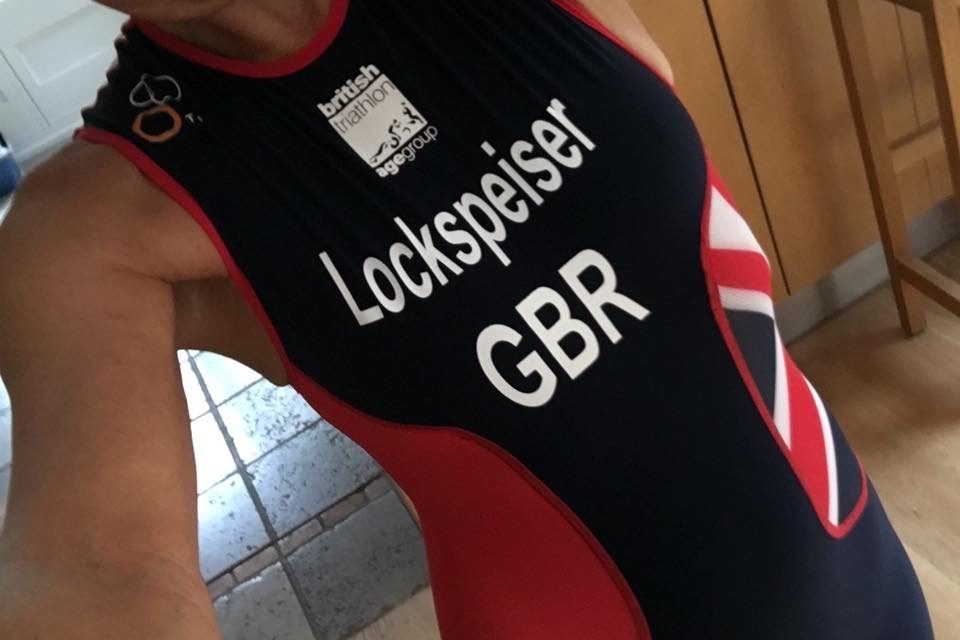 Today’s Friday Friend is Rebecca Lockspeiser – while it’s true that we knew Beccy before we became runners, it is also true that running together has strengthened our friendship.

Beccy is our neighbour in Chiswick and has been for over 25 years. Our families became friends when Alice, their eldest daughter, and Cam joined the Acton Swimming Club aged 10/11 years. Pre and post school ’taxi’ services to the pool and weekend trips to galas were shared by the families and friendships grew.

What we didn’t know at that time was that Beccy had run one of the first London Marathons and although she hadn’t run since the birth of her first child, Ben, we were very impressed that she did sometimes take part in Masters swimming galas for the club.

Skipping forward to 2013, Beccy started running as part of triathlon training, and as we were runners by then, naturally we encouraged her to join us at events including parkrun.

Let’s get Beccy to fill in the gaps! 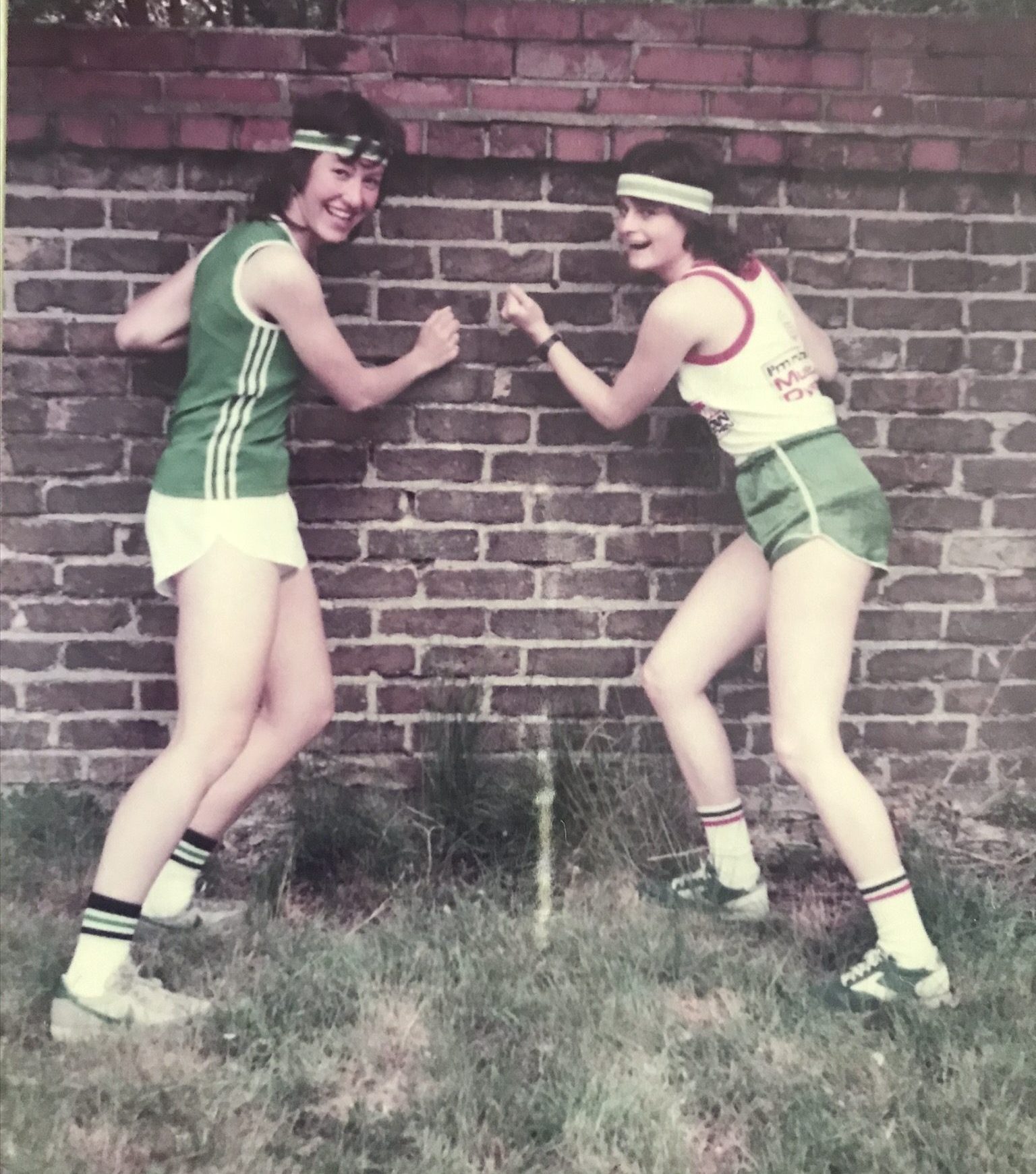 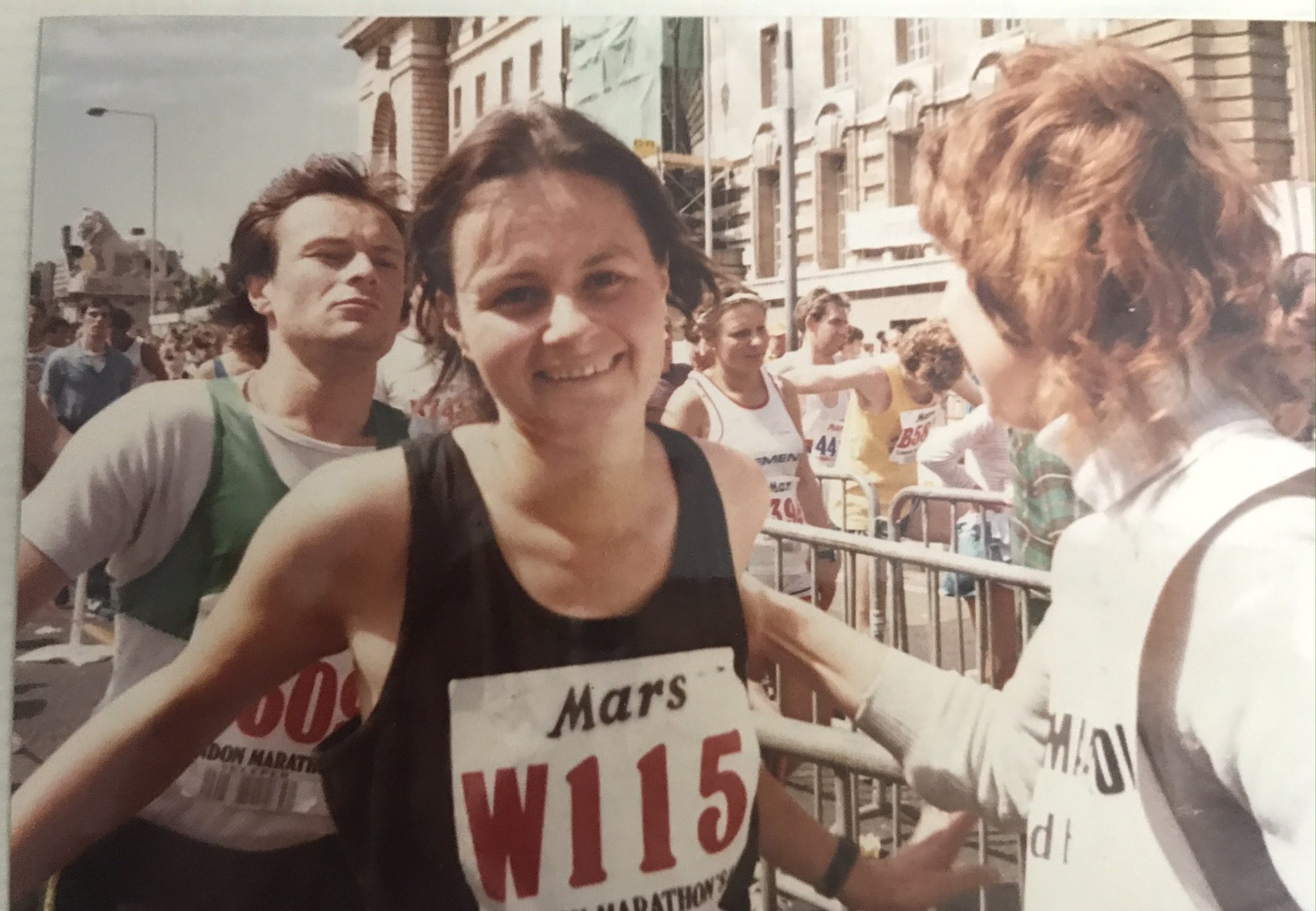 I love these old photos from Beccy’s first London Marathon.

Above: Beccy on the finish line

My running career actually comes in two parts. The first part was back in 1983 when a friend, Kate, suggested that we entered the London Marathon. I didn’t know anything about it at the time but thought it sounded fun so we signed up. In those days you had to sleep outside on the pavement by a certain post box in Central London the night before entries opened to get your application in the first collection.

We got our places and I loved the training, I got a real high from running. I was a smoker back then and soon realised the two did not go together so gave up smoking. I became a complete marathon bore.

I loved every minute of the race and actually signed up to run the New York Marathon soon after, but had to cancel it because I became pregnant with my first child. After that I sometimes swam but I didn’t run again for quite some time.  In 2012 I joined a swim squad at the local gym and met lots of women who were into triathlons – I thought I’d like to give that a try so started running again.

I knew Jacquie and Cam well by then and enjoyed taking part in a few shorter races with them including a 10K in Majorca – Dave, my husband was running too at the time and I really enjoyed the travel/run combination.

Jacquie and Cam also introduced us to parkrun which we loved. It was so inclusive, fantastic socially and a brilliant start to the weekend running round Richmond Park. Unfortunately Dave can’t run at the moment because of injury and he misses it so much. I went on to complete a number of triathlons and then decided to try the marathon distance again. 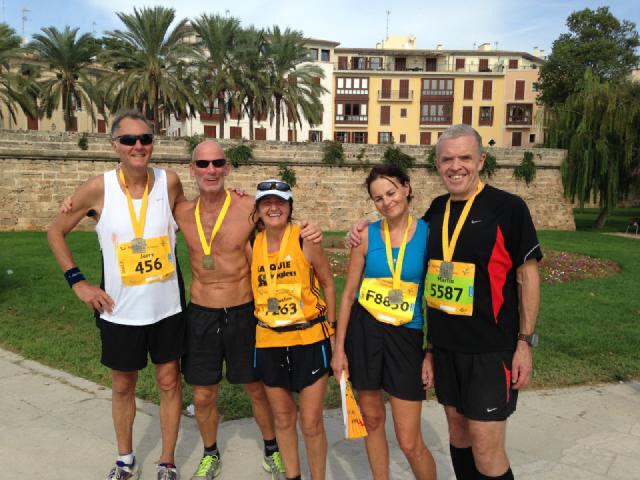 After the Majorca 10k/Marathon in 2013 – with Jerry, Dave, Jacquie,Beccy and Martin

For my 60th birthday I decided to sign up for a Half Ironman back in Majorca. I completed it in atrocious conditions and managed to win my age group which qualified me for the European Half Ironman championships in Austria later that year. Representing Team GB was certainly a highlight.

I also enjoyed my return to marathon running in Valencia in 2018. Jacquie and I trained and ran together while Cam ran with my cousin Tom. 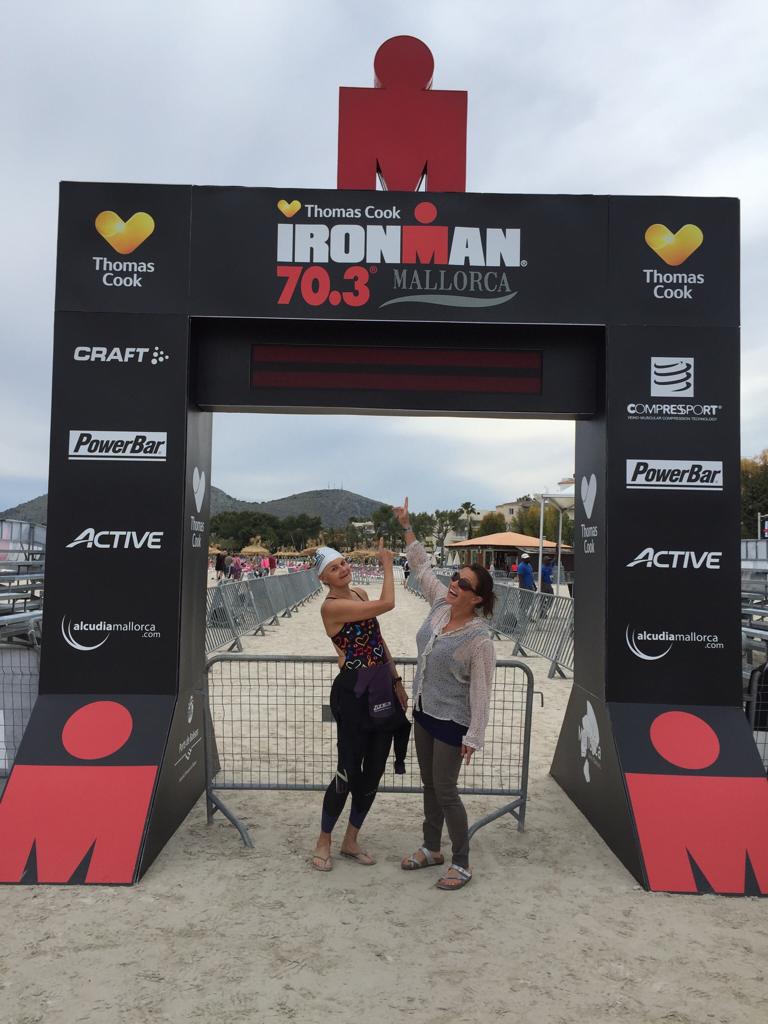 There are lots of races I would like to do, though in my enthusiasm to take part, I tend to forget about the training that is involved.

I would like to complete the New York Marathon after coming so close to running it in the past – that is definitely on my bucket list. I am also keen to do a team triathlon with my family – we have one planned for later in the year.

I like anything quirky – maybe the Midnight Sun Marathon would be good. I’ve lots of swimming events I’d like to complete too. I have swum the Bosphorus, but I would like to do the Hellespont swim between Europe and Asia. That’s near the top of my list.

In March I am running the Barcelona Marathon with my youngest daughter Liddy, who lives in the city. This is her first attempt at a marathon but I suspect her training is going a lot better than mine.

I did enjoy everything about the London Marathon – it was huge for me at the time – and obviously taking part in the European Age group Half Ironman championships was special. The Bosphorus swim was also a highlight.

But I would probably have to say my favourite so far is The Big Sur Marathon in California which I ran last year with my brother Jerry. We ran it as a sort of memorial to our parents who had both died in recent years. It was an amazing experience – really enjoyable – a bit funky and good fun with fantastic views along the way. I thoroughly recommend it. 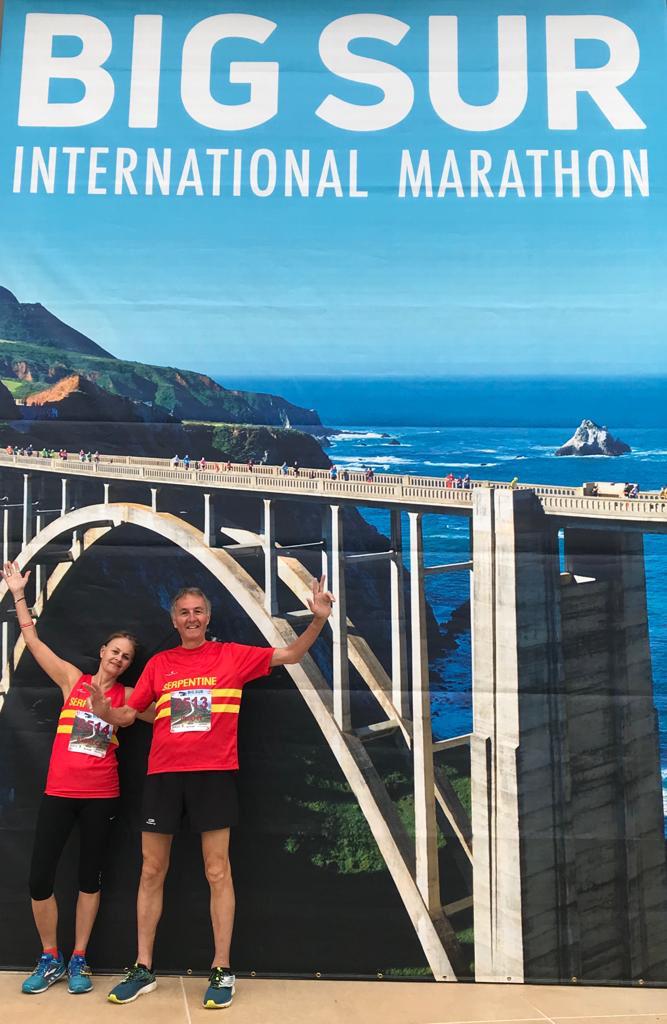 A couple of things come to mind here. Firstly sometimes ‘less is more’. As important as it is to train, the rest time is also important too.  I don’t think we always realise that some time out will do us more good than yet another run, swim, cycle.

Also I do think that so much of what we do is mental. A positive attitude is essential. I use mantras and chants to get me through the difficult times. One of my favourites is ‘I’m loving it, I’m loving it’ – especially when cycling uphill – and ‘I’m lucky to be alive’ if my mood dips in the middle of a long run. 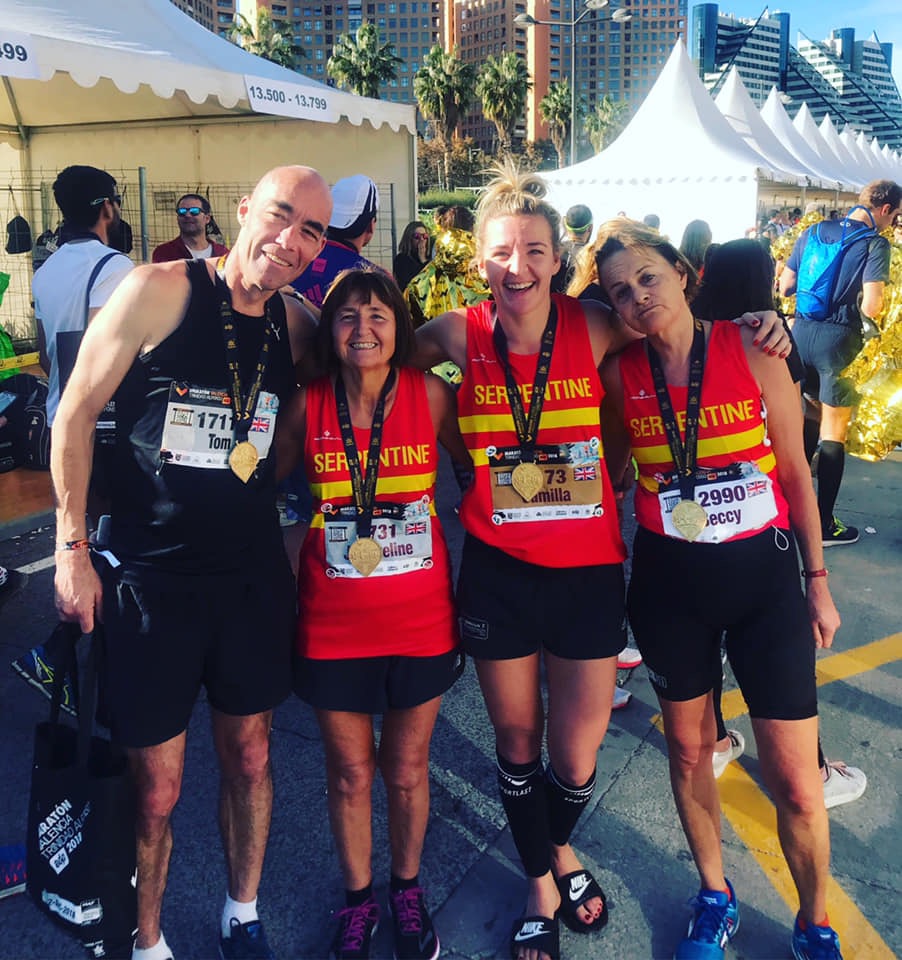 After the Valencia marathon – Tom, Cam, Jacquie and Beccy.

Thank you Beccy – our friend that runs…..swims and cycles! We are looking forward to our next run together – The River in Chiswick or Richmond Park and of course further afield! 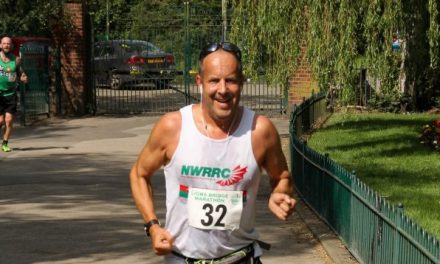