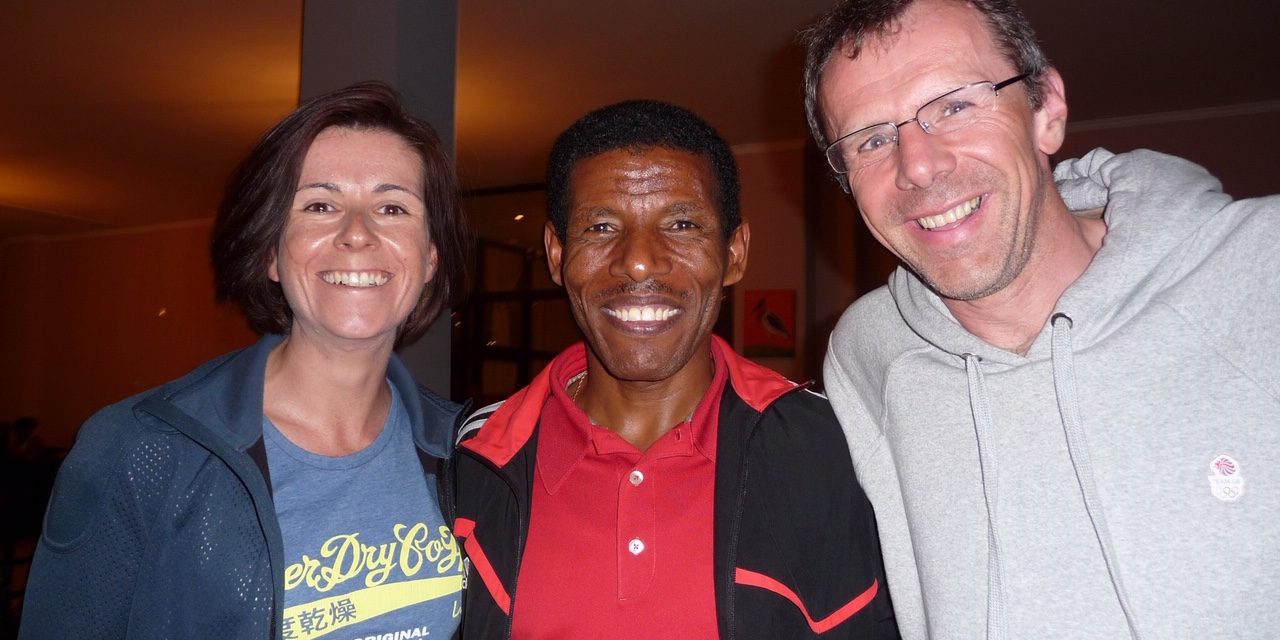 We chose Karen Weir to be our Friday Friend this week to help celebrate a special anniversary for one of the original parkrun thirteen.

Karen has played an important part in both our running lives. As event director at Richmond parkrun, when Jacquie first started running in 2009, she welcomed a very nervous runner (without a bar-code) into the parkrun family. She was there again two years later when Cam first made her parkrun debut. Thanks to Karen and Richmond parkrun we never looked back.

As you will read, Karen was there from the very start of parkrun – being one of the original 13 runners at the Bushy Park Time Trial 15 years ago this weekend.

She became event director at Richmond parkrun when it started in 2007 and oversaw it with a friendly but firm attitude. She was fully committed to the parkrun ethos and valued her fellow volunteers. Her stock response to the occasional complaint about minor flaws in the process was “Tell them that they can have their money back”.

Throughout the intervening years, in her volunteer roles for parkrun and in her work as a personal trainer and running coach, Karen has continued to be influential in the start and development of many other running careers.

As for her own running, Karen was the first female ‘Ironman’ we’d ever met and she certainly inspired us. She always appeared so confident and we looked on her achievements with awe. It is interesting, therefore, when reading Karen’s story that this was not always how she felt.

This weekend Karen is celebrating her 250th parkrun back at Bushy Park on parkrun’s anniversary. Let’s hear from Karen about her running journey.

There are so many answers to that question. I started running in my late 20s as I had a boyfriend who was far fitter than me and wanted to run, so I started running. It wasn’t easy and it didn’t come naturally. I was living in Vancouver at the time and it is the most wonderful city for running in and around, I did a ‘learn to run clinic’ at The Running Room (a running shoe and sports store) and then did my first 10km in the city – The Sun Run.

I still love going back to Canada and always make sure I get a chance to run the seawall in Vancouver – it feels a bit like a spiritual home to me. I’ve since been back to do Ironman Canada and also SeaWheeze – a half marathon organised by run and yoga brand Lululemon.

I carried on running because I liked feeling a bit fitter and healthier and like most novice runners I thought it was a simple way to control my weight – i.e. eat cake but not put on weight. As a running coach and PT I now know that is not the case but it was still one of my early reasons for running. After training for my first marathon (London 2003) I realised it for myself when despite running more than I ever had before I didn’t lose a single ounce of bodyweight.

Once I’d caught the running bug, the reason for running was then to get faster or go further and do more ‘brag worthy’ events. Thank goodness this was in the time before social media. Never being satisfied with a performance, despite achieving things with my running and then triathlon that a few years earlier I would have thought impossible, I kept pushing on. This was the destructive, obsessive phase of my running that led to injury, wasted entry fees, DNS’ and some DNF’s. There was no love of running anymore just a desire to do more, but never the satisfaction of a job well done.

But being a runner was (or so I felt) key to my identity. By now I was a running coach and PT (my second career after being made redundant in 2008, for me a positive outcome of the financial crash). I really felt if I didn’t run or do impressive endurance feats I couldn’t be a real coach or would just be invisible to everyone. Eventually and thankfully this phase of ‘why I run’ passed and I now have a much more balanced perspective on my running, my health and my quality of life.

Moving to the beautiful Peak District, switching off my Garmin, rejecting Strava, only running if I really want to, not because I have to or ought to has given me my enjoyment back. I’m older, wiser, stronger, healthier and ultimately my times have not dropped off (when I care to measure them).

Of course a constant through my running career has been parkrun.

I serendipitously just happened to be at the first Bushy Park Time Trial in October 2004 and due to friendship with PSH was convinced that I was capable of being the Event Director for Richmond parkrun (or RPTT as it was when we started). Eight years later I only gave it up when my husband and I moved away to the Peak District.

I knew parkrun was a route to getting settled in a new area, after all, where else do you find such a welcoming community where you can fit right in and make new friends? So after moving I became an Event Support Ambassador for the Sheffield area. I started Bakewell parkrun nearly 2 years ago and will very shortly be activating a new 5km parkrun in the city and also a junior parkrun.

So here we are 15 years on and I am only just getting to my 250th parkrun – no great feat when you consider other parkrunner’s milestone achievements, but in my defence if you add in my volunteering hours I’d be up there somewhere. But its not important. I am just really excited to be heading back to Bushy Park for the 15th anniversary and to run my 250th parkrun with amazing friends who have changed and inspired me. And to look back and celebrate just how far I’ve come.

I met Jacquie and Cam at Richmond parkrun and they are both up there on my inspiration list and one of my running highlights has been sharing the Comrades experience with Jacquie back in 2013.

My overall running highlight was running Comrades with my husband, Peter. We ran every step of the way together and crossed the finishing line together, there were highs and lows along the way but doing it together made it all the more memorable. I think for me it was the first event I started that I wasn’t actually sure I would be able to complete.

Another highlight was running a half marathon in Hawassa in Ethiopia and coming second international female (not as fast as it sounds!) and I was presented my trophy by the great Haile Gebrselassie.

And what’s on my bucket list? I just want to run places I love and do events that I enjoy. I no longer want to ‘endure’ just for the sake of it. So Canada is up there as a destination, Vancouver marathon would be fab, there are some amazing trail events in British Columbia, more stuff in Scotland and at the other end of the country the Jurassic Coast.

I’ve barely scratched the surface of the trails and fells in the Peak District – there’s so much opportunity for great running and places I’ve not even heard of or thought about yet. So who know’s where my feet will take me next.

Thank you Karen for your thoughtful contribution and for all you have done for us and so many other runners. This is yet another reminder to us all of how important it is to work out your priorities in life and to follow your dreams.

Have a brilliant day on Saturday. We wish we could be at Bushy to celebrate with you but we will be up in Scotland  for the Loch Ness marathon and running Inverness parkrun (of course).

We look forward to catching up with you in Durban in June if not before.

Karen now works at a running coach and personal trainer and also holds residential running courses at her home in the Peak District. You can find out more about Karen’s coaching and courses at Run with Karen

Featured Image: Karen with her husband Peter and Haile Gebrselassie in Ethiopia

Below: Karen in the hills of Scotland – the type of running she loves best. 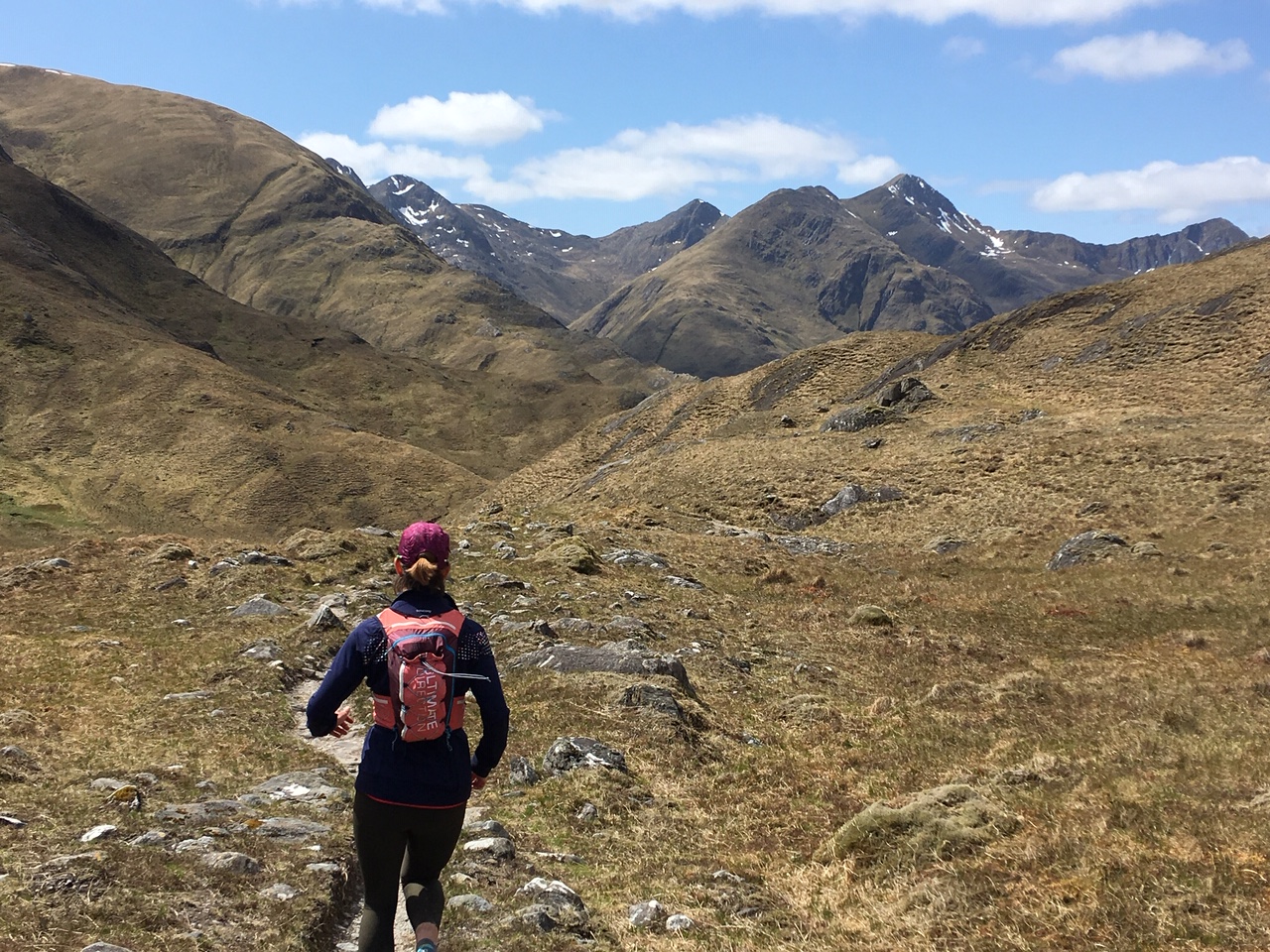 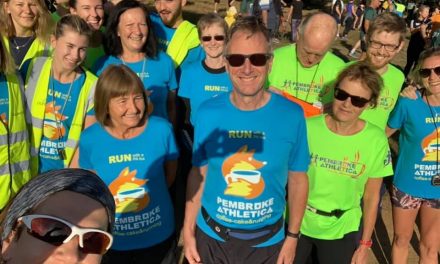 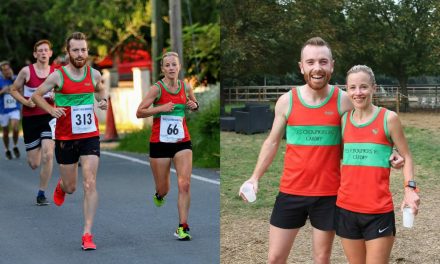 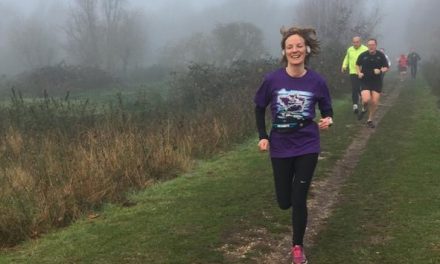 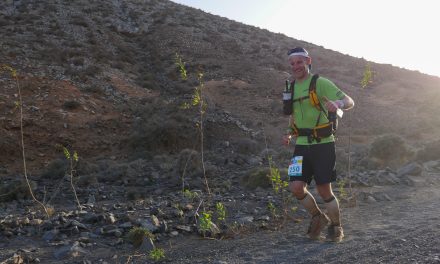