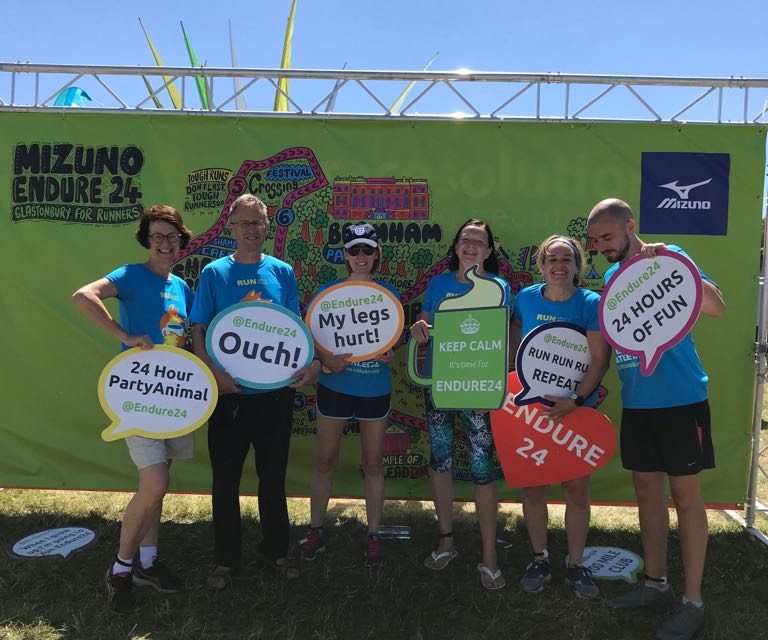 This was how we first heard about Endure 24 when Chris posted this on the Pembroke Athletica WhatsApp group. 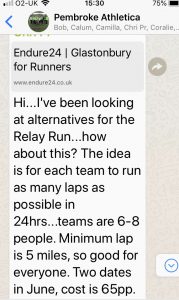 In previous years our small running group had entered team events. The Greenbelt Relay (220 miles around London) had been a big success when two years in a row we won the coveted Toilet Seat trophy (OK, so it was awarded for bringing up the rear but believe me that was quite an achievement), and The River Relays (marathon distance in teams of five) had been good fun – especially as we didn’t come last. Endure 24 allowed for team members running different numbers of 5 mile laps in their own time, and as we all have different running abilities this this sounded like a perfect event – running, 24 hours to fill, camping – what was there not to like? It appears not everybody was so sure, but more of that later. First a short introduction to Pembroke Athletica (PA)

PA is basically our post-Richmond parkrun coffee crew plus some guest runners. A few of us started meeting in Pembroke Lodge for coffee over seven years ago and as the years passed we have gradually acquired  approximately  25 members. It’s a bit of a puzzle how this particular group of people got together and stuck – we always encourage new intake, but funnily enough most people who come and have a coffee with us hear a few of our stories and are never seen again.

When wondering how best to describe us, the phrase that comes to mind is a “motley crew”. However, I’ve been advised to replace “motley” with “eclectic”  – eclectic sounds better – and we certainly are. Our ages range from 11 months to  65+ (and everything in between) and our sporting abilities, preferences and achievements are equally disparate. Some members run 5k once a week at parkrun whilst others run 60k+ and multiple marathons. Some average 35 min for their parkrun while others manage sub 20. Some are more experienced at swimming, cycling or even water skiing. Some are triathletes and even Iron(wo)men.

Over the years, PA has branched out; so we have for example Pembroke Aquatica who complete in swimming events, the Pembroke Peleton (obviously cycling) and Pembroke Artistica who take in art galleries and theatre visits and have even dallied in performance art. So as I said earlier with such a diverse array of talent, an event that allowed us to compete each to our own ability and desire would seem perfect – and to some it was. 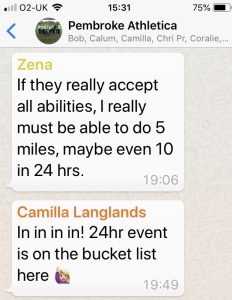 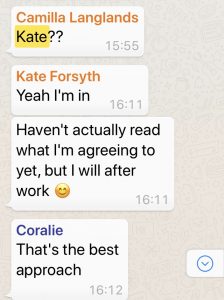 To others the combination of running, camping and little sleep couldn’t be worse. 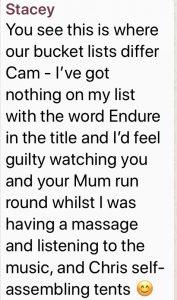 But once again Chris came to the rescue. 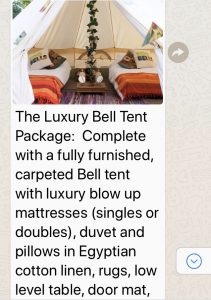 So now we had more interest – but there was still bit of persuasion to be done.

Then Michael came up with a master stoke (not sure that it was intentional but certainly timely) – find something that makes Endure look easy . 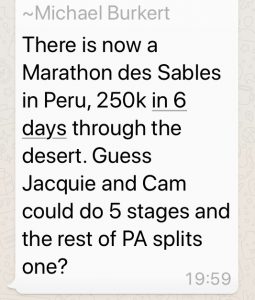 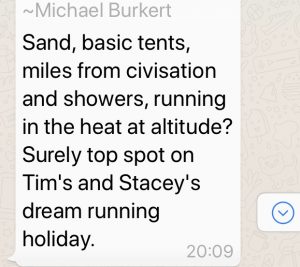 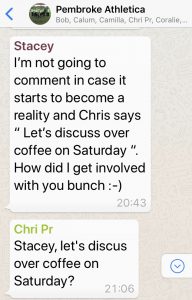 So one way or another, by the beginning of  December we had two teams of 7 signed up for Endure 24, and training could commence.

As with all things PA, this meant different things to different people. Steve and Zena started upping their miles; Stacey continued with her ‘light touch’ 5k parkrun (most weeks). Cam and I continued our marathon running, with the odd ultra thrown in. Chris continued an erratic number of miles each week. In other words, everyone did their own thing, as usual.

Summer approached, and the week before the event, as temperatures soared we made crucial final arrangements. 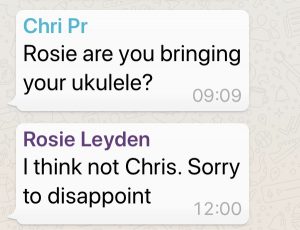 Winter training had paid off and our teams were in great shape. 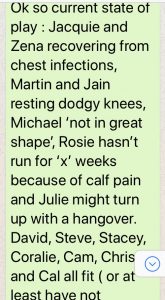 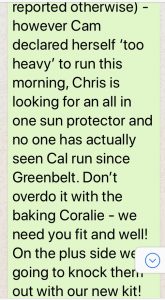 Finally the day arrived and we all headed up to Leeds. By the time we got to the site, most of the PA team were already settled in to their lu 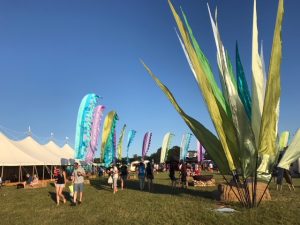 xury tents. The DJ was playing drum and bass music, flags were flying in the breeze, and the sun was hot. It felt for all the world like a music festival.

Unfortunately, we had missed 3-year-old Rowen running his 1 mile race, but we arrived in time for the lighting of the fire pit and several glasses of wine and some food before retiring to our tents for a good night’s sleep. 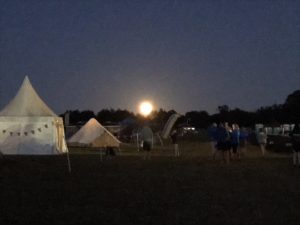 On Saturday morning, some of us got up to go to the local parkrun in the picturesque Yorkshire town of Wetherby, whose numbers were swelled by other (over-)keen Endure24 runners. PA member David ran a parkrun PB – we took this as a good omen for the weekend. 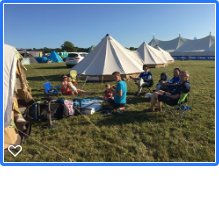 When we arrived back at camp, there were barbecued bacon rolls and coffee. Then things got real. Running numbers and timing chips were handed out and affixed, and team running schedules were posted on our whiteboard. Tension was building. PA had two teams – Owls and Foxes. Owls consisted of Jacquie (capt), Jain, Cal, David, Steve, Zena, and Rosie; while the Foxes were Cam (capt), Martin, Stacey, Chris, Michael and Coralie. It was decided that as captains Cam and I should start the ball rolling, and we agreed to run the first lap together. 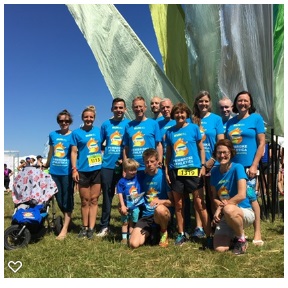 There was a great festival atmosphere as we set off in the mid-day sun, with the temperature around 27c. The route was an attractive undulating trail, half through enchanting shaded forest, half on hilly paths through open parkland. The km posts were marked with suitably encouraging comments, and there was plenty of music and support en route. With all these distractions, and a surprise meeting up with a couple of friends, that the lap was over before we realised, and we passed the batons on to Jain and Stacey. Everyone had a positive first lap – except maybe for Julie who in true festival style had arrived Saturday morning slightly hungover.

There was a boost for the team when Poppy (a PA member based in Liverpool) arrived mid afternoon to support.

Although we were running multiple laps on the same course, the nature of the course and the conditions meant it was always different.

In the heat of the day: hot and dusty with sunlight filtering through the trees.

In the evening: a breeze, with the sun setting, but still hot and dusty

At night: the forest was magical, lit up with fairy lights and a full moon.

Very early morning: atmospheric as the sun rose above a low-lying mist; cooler, but somehow still hot and dusty. 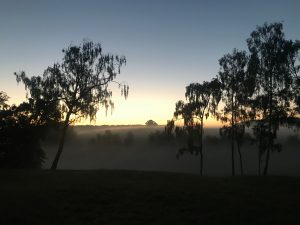 Mid morning: even hotter and dustier.

An entertaining aspect of the event was the names the other teams had chosen for themselves. I particularly liked the “Mo Farriers” (complete with face masks), “I thought it was a parkrun” and “Free camping weekend, she said”.

The event in general was incredibly well organised. The toilets and showers were clean until very near the end. The food was excellent and cheap with no queues – you could get a sausage sandwich or a cup of tea at 4 in morning. The massage tent was open 24hrs. The glamping is strongly recommended, as – apart from having really comfortable accommodation – you are close to all the facilities of the race village.

The atmosphere on the course was really friendly and supportive. There was some 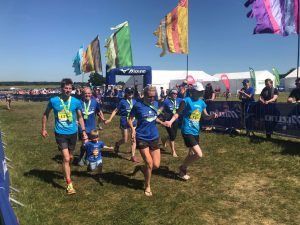 amazing running in very difficult conditions, and the 24 hours were over before we knew it. As for PA, everyone excelled. Jain, Steve, Zena, Stacey and Calum all ran beyond their expectations. Coralie and Michael were amazing coping with two young children and producing excellent performances. David, Cam and Chris ran some amazingly fast times. Martin and Rosie kept going despite injury (Rosie heroically power walking her laps). Julie did her trademark sprint finishes right to the final lap, and I survived despite recovering from a chest infection. And whilst not running, everyone was busy supporting.

The event finished with the teams 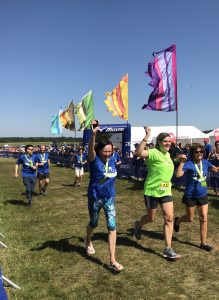 running the last stage of their final laps together – all feeling exhausted but happy and with a great sense of achievement.

Back home, meanwhile, Chris was busy on the WhatsApp group … 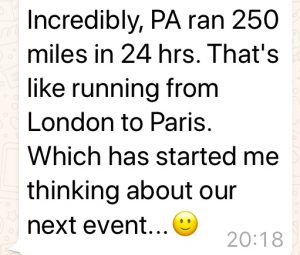 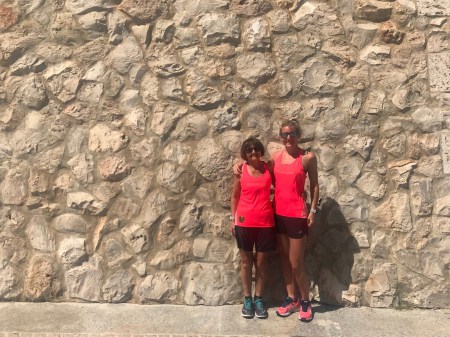 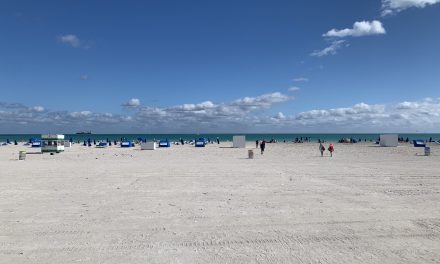 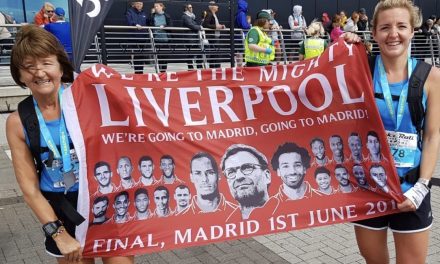